The truck had Polish license plates and was carrying steel beams. The dead passenger in the truck has been identified as a Polish national, according to police. The Polish owner of the trucking company, Ariel Zurawski, told TVN 24 television that his cousin worked for him and that he couldn't be reached since around 4 p.m. local time.
Zurawski told the broadcaster there was no way his cousin carried out the attack. "Something must have been done to him," he said.
The nationality of the suspected driver in custody is still unknown, but German news agencies "Die Welt" and dpa cited security sources as saying the arrested man was an asylum seeker from Pakistan or Afghanistan. They said he had arrived in Germany in February.

BBC refers to him as simply a 'migrant' 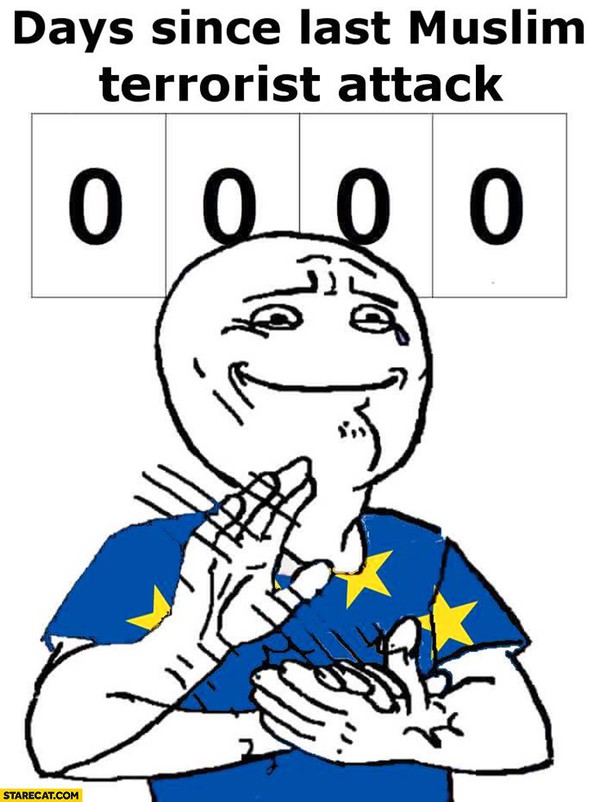 He is an unaccompanied minor from the front lines of Aleppo! Stop being a fucking white male!

Yes, this misunderstood young boy is trying to tell us something - we should learn to listen. 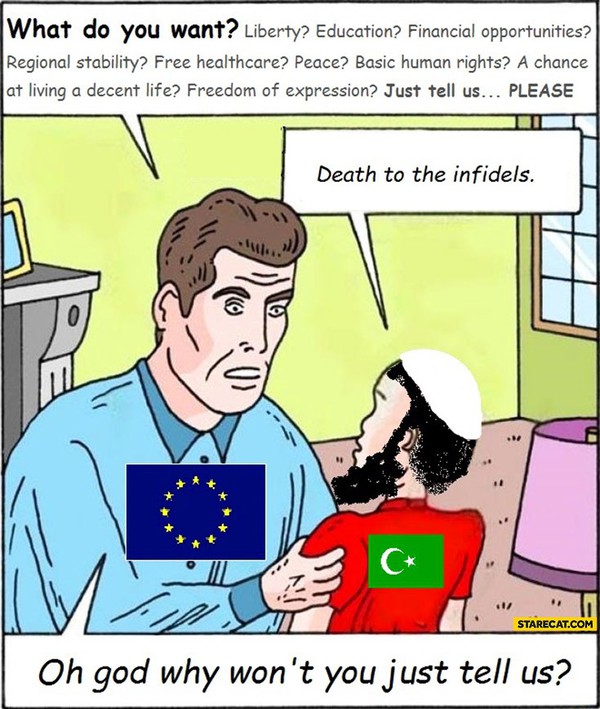 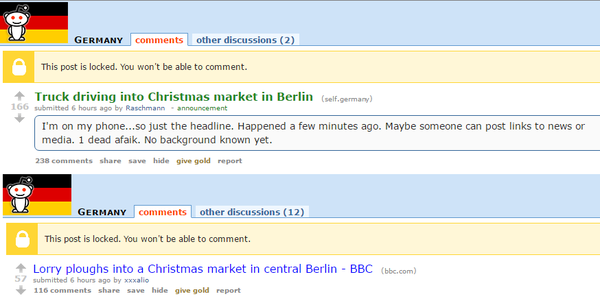 According to liberal media it was a HOLIDAY market, because they aren't allowed to say Christmas. 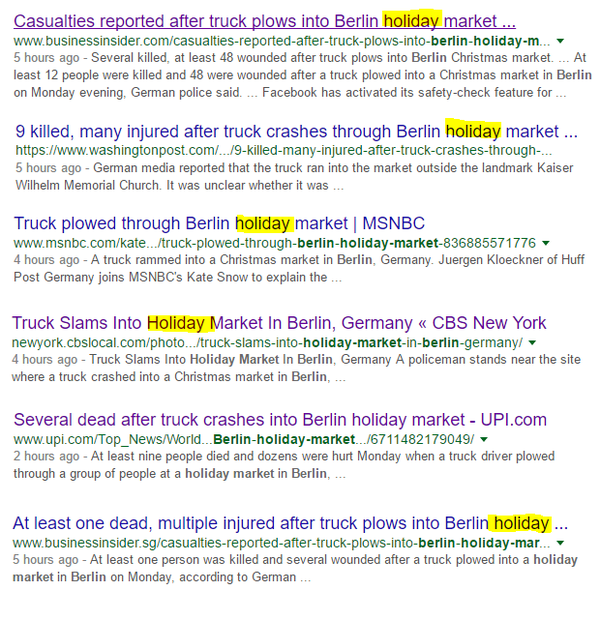 Truck drivers get lost too easily due to insensitive Germany; all signs to be switched to Arabic and/or pictures of rape.

Is patnet becoming the place for wimps?

DIE ALL GERMANS!
REAL NAZIS would give all Muslims 30 seconds to leave the country or the SS will throw pigs blood & entrails on all Muslims & their property & fill their mosque with swine shit as they are chasing them out of the country.
Your coward trump hasn't even tweeted one idea.
And the sorry Russians do nothing when their ambassador is killed by a Muslim.
They don't have pig waste to drop all over TURKEY? The BEAR has no BALLS.
Your token president hasn't even told all Muslims to commit suicide or he will drop PIG SHIT & BLOOD bombs on Mecca & Medina. It would be a double whammy on the Dome of the Rock. That would screw the Muslims & Jews.
BLASPHEMING MUSLIMS need to be taught a lesson.
Coward americans run away from CRUSADES 2.0.
Hell! Even the Republicans are bleeding heart liberals.
What has happened to my america?

Sun Tzu & his ART of WAR are less than pig shit.
Patnet is the CENTER FOR STRATEGIC THINKING.

We are all fucked & we did it to ourselves. Look in a mirror & you will see the enemy. 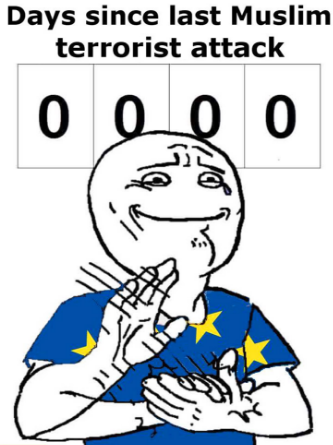 MUSLIMS on edge after Mecca,Medina & Dome of the Rock are obliterated.
Probably thinking,WE should have taken care of our radicals in house.

Funny you should mention Russia. What's the connection between the left and the right part of your sentence? Do you think turning blind eye to Putin's adventurism in Eastern Europe will somehow stop the attacks?

Funny you should mention Russia. What's the connection between the left and the right part of your sentence? Do you think turning blind eye to Putin's adventurism in Eastern Europe will somehow stop the attacks?

It's a question of priorities. We don't turn a blind eye to Eastern Europe, but we don't lose focus on the greater threat......Islam.

Funny you should mention Russia. What's the connection between the left and the right part of your sentence?

The connection is that the US's regime change agenda in Syria, agains a regime viewed as allied to Russia, is what has enabled the spread of isis. If you don't understand this you are a moron.

What exactly is Russian adventurism in eastern Europe? Their reaction to a western-engineered anti-Russian coup in Ukraine?

The Polish Driver was hijacked and killed by the suspect . Makes sense, hard to imagine a Pole running down people at a Christmas Market, no matter how much Vodka might have been involved.

'Germany is at war': Berlin on alert for new terror attack as police hunt armed ISIS gunman who killed 12 people in lorry massacre - after security services admit they got the WRONG man


Security sources have told one German newspaper the real killer could still be on loose with a gun
Senior police chief said: 'We have wrong man. Perpetrator is armed, at large and can cause further damage'
Arrested Pakistani asylum seeker Naved B, 23, entered country under false name and has criminal record
Asylum seeker was living inside hangar for immigrants at a Berlin airport since raided by commandos at 4am
At least 48 injured and 12 dead after truck mowed down shoppers at 40mph in a busy Christmas market
Three of the dead have not yet been identified but six victims have been confirmed as German citizens
Driver steered at crowds - including children - along 80 metre stretch of pavement packed with stalls
Masked killer fled scene but was pursued by 'hero' witness who chased him on foot and led police to him
Polish-registered lorry understood 'stolen by hijacker', who may have murdered driver Lukasz Urban
Angela Merkel says Germany is in 'mourning' - but terror attack could be hammer blow to 2017 election hopes

Some percentage of imports and natives will go terrorist.

The lorry's original Polish driver, Lukasz Urban, a father of one, was transporting steel beams into Germany, but was found shot in the cab after the crash. The gun has not been found.

The terror attack could be a political disaster for Angela Merkel, who will seek a historic fourth term as German Chancellor next year. The German leader, who left white roses as the scene this afternoon, has staked much of her political capital in opening up Germany's doors to refugees and in doing so divided a reunited land.

After another terror attack on German soil this year it was revealed:

12 people are dead and 58 are injured - 16 seriously - after a lorry is driven at 40mph through crowds at the famous Breitscheidplatz Square Christmas market at 7pm last night.
Hours earlier the lorry was hijacked from a Polish driver taking steel to Berlin from Italy. Lukasz Urban, a father of one, was found shot dead in its cab. It is not yet clear when he died.
Witnesses to the massacre saw a masked man flee the lorry. A member of the public chased the Pakistani suspect Naved B, who was arrested in the Tiergarten park. Police have since admitted he may not be the right man.
Police commando squad raid a hangar at Berlin's Tempelhof airport, which was closed and used as a camp for refugees including Naved B, who is believed to have entered Germany a year ago under a false name. Four men are questioned and a laptop and mobile phone seized.